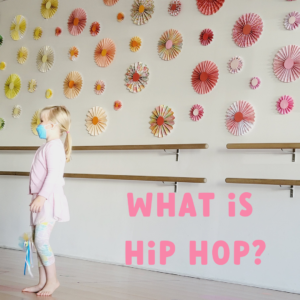 The style of hip-hop dance, like hip-hop itself, is sometimes a bit hard to define. Lots of styles have developed in and around the genre, and many people have very strong opinions on what is and isn’t a part of the style.

As hip-hop developed as a musical form through natural variations made by new artists and DJs, a language arose with it. The fundamentals of hip-hop became the pillars of it’s migration as a distinct music form in the late ‘70s and early ‘80s. These four recognized fundamentals–emceeing (rapping), deejaying (spinning), graffiti, and breakdancing–became the essential pillars of the genre.

One of the most recognizable components of hip hop it’s origin in black and Latin neighborhoods, particularly the Bronx, in New York City in the 1970s. The music and art found there was something spontaneous and generated by human interaction rather than codified rules and academic processes. “Street dances’” were just that, parties and groups of people developing moves together to the emerging beat-based music of the era.

Because it developed massive popularity outside of academic settings, hip-hop music and the style of dance soon saw a reaction from the music industry. More stylized forms of commercial dance, like jazz-funk, started appearing in music videos and television. These commercial styles helped propel hip-hop dance into the mainstream.

WHAT REALLY IS HIP HOP?

Hip Hop isn’t just just one unique style, like krumping, breaking, or popping and locking. It’s a mix of all of those styles and many more. It’s an approach to choreography that is in tune with the beats and grooves of the music without being limited by specific characteristics. Hip-hop is a world of moves and styles which have been built into the choreographer’s tool belt. It’s a celebration from the birth of street dancing all the way to full domination of hip-hop in commercial and artistic spaces everywhere. It’s a visual language of hip-hop culture. To put it simply, hip-hop dance is a world of movement and visual styles that are now forever associated with hip-hop music and can be used by any choreographer and dancer as a celebration.

He is highly regarded as the King of Pop, however, a lot of his dance moves find their origin in hip-hop dance. He married hip-hop dance styles with funk, soul and electric boogaloo to create a unique blend of pop, and hip-hop worthy dance. His style is revered worldwide for its uniqueness and fashion.

The Les Twins are identical brothers of French descent. They are recognized internationally for their new style hip-hop talents. They have won several hip-hop awards including the World of Dance in 2010. They’ve been highlighted on BET, Good Morning America, the Ellen DeGeneres Show and have worked with people like Beyoncé, Kanye West and Timberland.

Emmy Award winning Choreographer, Dancer, Singer, Director, and Actress. She is the founder and main choreographer of the Dance Studio “The Palace Dance Studio”, which has produced group ‘The Royal Family’. Which has won World Hip Hop Dance Championship three times in a row, becoming the first group in history to achieve it. She has worked with the likes of Rihanna, Justin Bieber, Jennifer Lopez, Ciara, and many more.