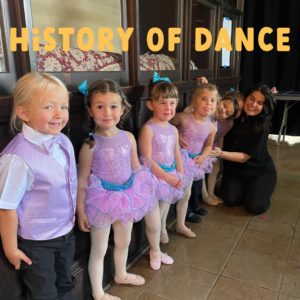 Over the last couple of weeks we have gone through styles of dance offered here at the studio! This week we will briefing the history of dance from our blogs as well as other styles, and the order in which each style of dance came to the forefront of history.

Ballet is a formalized form of dance with it’s origins in the Italian Renaissance courts of 15th and 16th centuries. Ballet spread from Italy to France with the help of Catherine de’ Medici, where ballet developed even further under her aristocratic influence.

Bharatanatyam is one of the oldest and most popular forms of classical dance that originated in Tanjore district in Tamil Nadu in South India. The origin of this dance can be traced to the sage Bharata Muni’s Natyasastra.

Modern dance is a broad genre of western concert or theatrical dance, primarily arising out of Germany and the United States in the late 19th and early 20th centuries. Modern dance is often considered to have emerged as a rejection of, or rebellion against classical ballet.

This form was established in the 1830s by Joseph Lanner and the elder Johann Strauss, and from then the waltz was particularly associated with Vienna, although it was popular throughout Europe.

Jazz dancing, and it’s steps and style, originated from the dancing of African Americans that were brought to America as slaves. Later it was brought from vernacular to theatrical.

Tap dancing has evolved considerably to become the art form we know today. Before there were tap shoes, dancers wore soft shoes, or clogs. Tap dancing originated as Juba, a kind of dance practiced by African Americans that were brought over to America. It melded with Irish dancing and continued to alter as it encountered the influence of jazz dance.

Salsa represents a mix of Latin musical genres, but its primary component is Cuban dance music. The roots of salsa originated in Eastern Cuba and Afro-Cuban dance like Afro-Cuban rumba.

Although originally informed by and borrowing from classical, modern, and jazz styles, it has since come to incorporate elements from many styles of dance. Due to its technical similarities, it is often perceived to be closely related to modern dance, ballet, and other classical concert dance styles.

Hip-hop dance refers to street dance styles primarily performed to hip-hop music or that have evolved as part of hip-hop culture. It includes a wide range of styles primarily breaking which was created in the 1970s and made popular by dance crews in the United States.

As we see dance comes in many forms!

Human beings have been expressing themselves through movement since the beginning of time. With that the earliest historical records showing the origins of dance are cave paintings in India dating to about 8000 BCE. As well as Egyptian tomb paintings can also be seen depicting dance in about 3300 BCE.

Dance and movement have always been a way of life.

“The Dancer believes that his art has something

Mix it all together & you get a peaceful Sunday☀

Squad goalz or costume goalz? We think the answer

While we throwback on this Thursday lets take a mo

One of the best days of the week has come around!

✨TEACHER TIP TUESDAY✨ The place me of arms & w